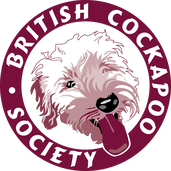 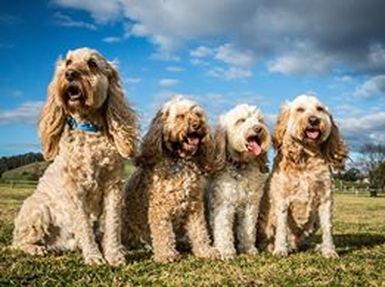 F2 COCKAPOO ON THE LEFT, WITH HIS F1 COCKAPOO PLAYMATES
These terms are used to describe what generational cross a Cockapoo is and it is sometimes a handy explanation because it isn't always apparent on quick inspection.  As Cockapoos are a crossbreed there are a variety of mixes that may be seen and this is a brief guide to explain some of them.

​A mating between a pedigree Cocker Spaniel and a pedigree Poodle produces F1 Cockapoo puppies.  The F1 denotes that they are a 'first generation' in the mating process.

This categorisation continues with each generation, F1, F2 etc but is further changed if at some stage a Cockapoo is bred with a pedigree Cocker Spaniel or Poodle. The pups resulting from this mating are given a ‘b’ suffix, indicating they result from being bred back to the original pedigree stock. 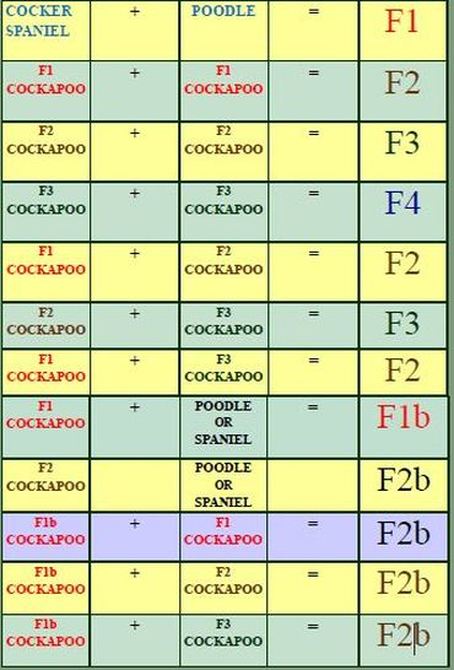 A ‘b’ pup can end up with a tighter Poodle coat or a straighter Cocker coat because of the extra genes from the pedigree, although you never know really with Cockapoos what their coat is going to be like.
When a Cockapoo is mated with a Cockapoo, they cause a new generation— F2, F3 etc. However, the breeding can only move up one generation for the lowest number, so for example an F1xF2 = F2, and an F1xF3 = F2.
Some say that as more Cockapoos get bred and we get past the 3rd or 4th generation, litters will be more stable and so will be less likelihood the pups will show the Cocker or the Poodle side, they will all look more or less the same. To be considered a pedigree we would have to have F7’s being bred.

Part of the charm of the Cockapoo is that we never know what the coat is going to be like, or even what colour they will end up as because some will carry the fading gene and their coat will change colour over the years.
​You may have a ‘straightie’, a Cockapoo that looks like a Cocker Spaniel and sheds fur, or you may have a Cockapoo with a tight Poodley coat, or one that fits some-where in the middle.
To be called a Cockapoo they have to have at least 25% of the pedigree core breed in them, and regardless of what they look like they are all lovable. 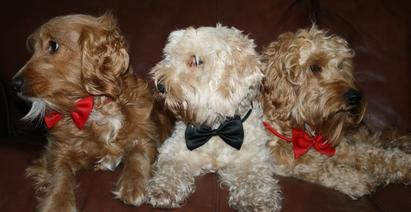 The most common type of Cockapoo you will see is called an F1.  This is the result of a pairing between a pedigree Cocker Spaniel and a pedigree Poodle.  Although F1 Cockapoos are a first generation cross, you will still get a variety of looks and coat combinations depending on which parent the pups take after. 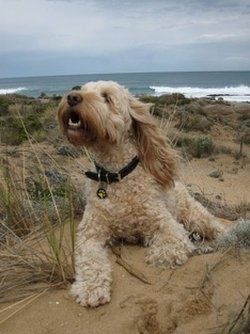 ﻿When two F1 dogs are bred from, their puppies are knows as F2 Cockapoos.   This breeding mix can result in something known as 'The Grandad Effect' where some of the puppies in a litter can inherit  some different traits from either the Poodle or Cocker Spaniel, while others may have more of the look of its parents.  So, in the same litter you may have puppies that inherit the curly Poodle coat, the straighter Spaniel coat of the Grandparents, while others take after the 'Cockapoo look' of the parents.﻿​ 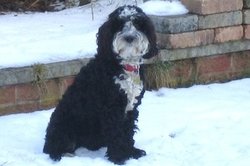 When two F2 cockapoos are paired, their pups are called F3 Cockapoos.  ​ 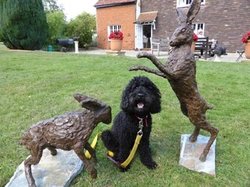 It can start to get a bit complicated when other breeding options are used - for example breeding a Cockapoo with a Poodle for example.  The resulting offspring are given the 'b' suffix, so there will be an F1b, F2b etc., depending on which generation the breeding parents are.
At the moment this is seldom seen and most breeders seem to focus on breeding F1 Cockapoos.