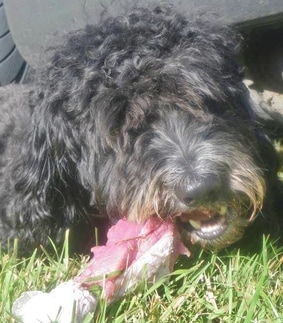 When owners start to think about whether to feed their dogs raw it can seem a very confusing thing to do.  There seems to be such a variety on the type of things to feed, some use vegetables, some give things like fruit and yoghurt, some just give meat and bones.  It is no wonder people wonder just 'how do I start?'

First of all, why is a raw diet becoming more popular with dog owners, despite many vets, media articles etc saying it is a bad thing?

Years ago it wasn't unusual for the family pet to be fed on scraps from the table, leftover food from the family, along with the odd bone from the Sunday roast.  As food shopping habits changed, and people started using supermarkets etc, legislation came in to govern the transportation of prepared meats for sale in shops.  The local shops became a scarce commodity, and people couldn't just go to the friendly butcher asking for scraps and bones for the dog.

Around the same time, commercially prepared dog foods and kibble started to become more and more popular.  It was convenient, easy to store, and marketed as the best option for your dog.  It soon became a huge industry, with companies like Nestle, Mars, Proctor & Gamble and others all taking over dog food companies.

While the growth in kibble and commercially available wet food continued, many dog owners started to become concerned about the quality of food they were giving their dog.  The ingredients on some of the packaging just didn't seem healthy.  Things like cereals, animal derivatives (which means that the source can be any part of the animal at all), soya or colourings to make it all look more appealing to the human serving it up, and some started to question if there was a better alternative.

There are different views on how to give a raw diet.  Some feed commercially prepared raw meals, usually in the form of mince and containing other ingredients like minced bone, offal, and maybe some fruit and veggies too.
Other people go down what is called the DIY route, and measure out their dogs daily requirements in meat, bone, offal etc in separate quantities every day.  Some include fruit and veg, some people don't.  Some will supplement the diet with raw eggs, yoghurt or tinned fish, others don't.  The stories below give details on a raw feeding menu and how to transisiion a dog over from kibble to raw dog food.